Blackstone Chambers and Guy Fox History Project are delighted to announce the publication of a children’s book celebrating the impact that women have made on our legal system over the past century. 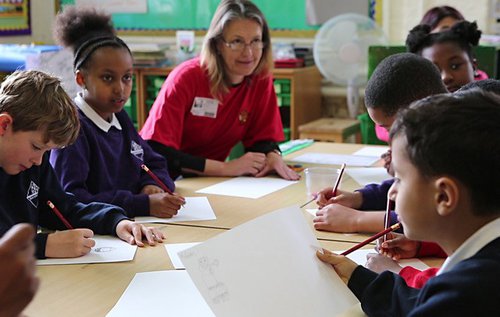 History Rocks: Women in Law’ commemorates the 100th anniversary of the Sex Disqualification (Removal) Act of 1919, which received its Royal Assent on December 23rd 1919 and was developed in a unique collaboration with children at Snowsfields Primary School (London Bridge). Working side-by-side under guidance from the Guy Fox team, Year 4 pupils and volunteers from Blackstone Chambers explored women’s rights during the Edwardian era, re-enacted the legislative process that led to the law’s passage, and learned about women who have made legal history over the past century.

During the project, the children created the drawings that illustrate the 44-page book. Participants also visited the UK Supreme Court for an audience with Baroness Hale, a history maker herself as the first woman president of the Supreme Court of the United Kingdom.

“It has been a pleasure and an inspiration to be involved in this project.”, says Kate Gallafent QC, Blackstone Chambers. “Exploring the historic achievements of women in law with such curious and enthusiastic young minds makes me feel hopeful for a more equal future.”

“This is a small book with a big mission”, says Kourtney Harper, Creative Director of Guy Fox History Project. “Not only does it celebrate a century of legal history, but it also challenges us to keep working to make society fairer for everyone.”

This book is the fifth in the Guy Fox series exploring different historical topics. Other titles include ‘Magna Carta’ and ‘The Great Fire of 1666.’ This is the third partnership between Blackstone Chambers and Guy Fox, having previously collaborated on ‘How the World REALLY Works: Our Legal System’ (2013) and ‘History Rocks: Magna Carta’ (2015). Guy Fox History Project is an educational charity in London, with a simple mission: To create innovative activities and publications that encourage children to explore the world around them.