Tom Hickman QC gave oral evidence to the Bundesverfassungsgerict, the Federal Constitutional Court of Germany, on 14 January 2019 in a challenge to German laws governing the external surveillance of telecommunications by the German intelligence agencies.

Tom Hickman was invited by the court to provide expert opinion regarding the legal regime governing the authorisation and oversight of the UK intelligence agencies’ external telecommunications surveillance. It was the first occasion that the Constitutional Court of Germany has taken evidence on foreign comparative law.

The case involves a challenge to the Federal Intelligence Agency (BND) to engage in foreign-focused bulk interception are challenged under the German basic law (BL). The Const Court last looked at such interception powers in 1999 and left open whether the BL protects non-Germans outside Germany. Information about the action can be found here and here.

Tom later tweeted eleven “fascinating facts” about the Court that he had learnt from his experience (on Twitter):

• The German Federal Constitutional Court sits with an even - yes even - number of Judges (two Senates of 8). The idea is that more than a bare majority is required to rule any law unconstitutional.

• There is no appeal. The court has to get it right first time and there is no scope to argue that it got it wrong.

• It includes a number of former Law Professors who were not previously judges.

• Hearings are rare - each Senate has only about 3 hearings per year - and they last only a day, sometimes two.

• They can however stretch long into the evening (8.30pm on the day in question!).

• It is an open and welcoming court which seems to have great public affection and trust. There is however no cafe and no gift shop.

• It is about as far away from Berlin as it’s possible to get without being in France.

• The legal submissions are largely done on paper and much preliminary legal work is done by the reporting Judge and their clerk (a seconded judge with significant judicial experience.)

• The purpose of hearings seems to be to put questions on facts and get comments from interested parties. I was surprised that ministers and public officials of all levels are questioned, even in a case concerning the workings of the intelligence agency.

• Yesterday (for the first time in its history) the court summoned a foreign lawyer to give evidence on comparative law. The judicial questioning was insightful, rigorous and included some curve balls! It is an understatement to say it was an enormous privilege. 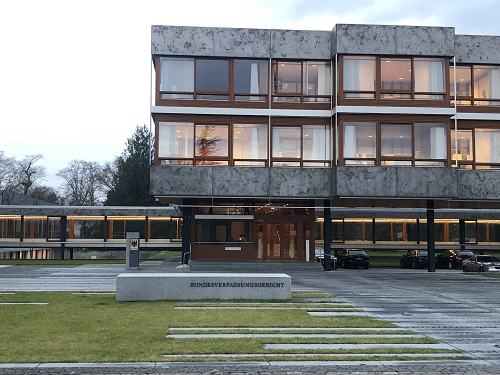